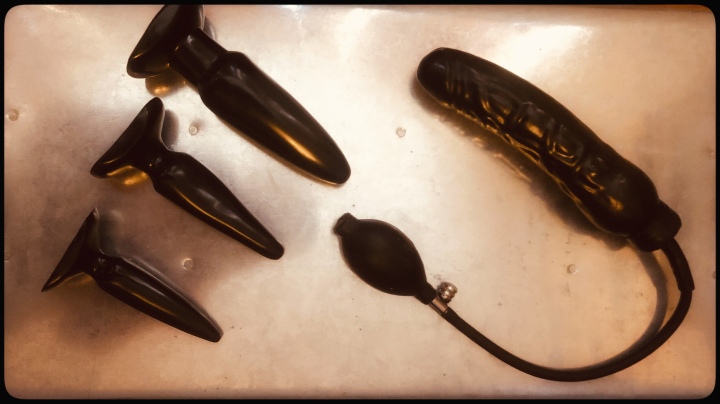 I usually take a day off work in early December to get all my presents bought in one go. I’m not one for internet shopping for Christmas. This year I was done by mid afternoon and tapped on Grindr to see if there was anyone interesting about. There was a blank profile very close to me. I had a look and he was 22 with some good stats and seemed most interested in getting some toys in him. 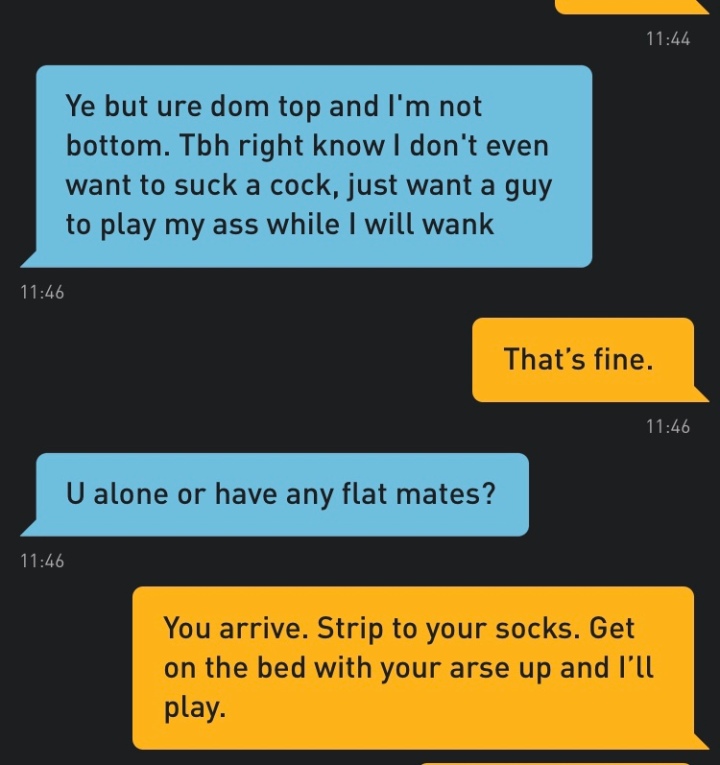 In a few minutes he phoned to say he was outside. I opened the door to a good looking blonde lad. He was keen to get inside and pushed his sexy body against me as he got in. We had agreed that he could use the bathroom to make sure he was ready for my toys, so I waited as he prepared.

The lad strode out of the bathroom confidently. He was just in white trainer socks after abandoning the rest of his clothing in the bathroom. There was not a hair below his neck and his semi aroused cock bounced between his legs. I told him to get on the bed.

He got on all fours and wrapped himself around my duvet. His perky white arse was pointing to me and my hands began to explore the gift before me. I pulled his cheeks a part and eyed his freshly showered boicunt. Bending down I began to rim him and his groaning encouraged my tongue to explore him. One hand rubbed his balls while the other slapped his arse and rubbed his back. My exploring hand reached to the back of his neck and I held him firmly in position as I licked him.

With a lubed finger I slid into the lad’s tight ring and pushed through. The circular motion I made clearly had the right impact and he pushed his arse up to encourage me. I lubed up the smallest butt plug and the lad said slowly as it enters him. The black slimline object slid inside and I watched as his ring welcome the pleasure object inside. He took it with no problem so I pulled it back a little so the thickest part sat in his ring, stretching him.

I told the lad I was going to use the medium butt plug and he asked to flip onto his back, saying he wanted to wank.

The next plug was more of a task for him and he kept saying slower. The girth of the object clearly challenged him but he was determined to have it inside him. He continued to wank as the plug made its way inside, it was impressive to see it vanish.

It took a few minutes but he was successful in taking it all the way in. The lad barely looked at me as his eyes roll around and he hand worked up and down his cock. He made encouraging noises as my free hand explorer his chest.

“OK, but you need to wear a condom. I’ve got a girlfriend.”

My already hard cock goes rock hard now the lad has mentioned he was straight. Before he had the chance to change his mind I rolled on a condom and once it was fully lubed I positioned it as his hole. Filling the lad with toys had been horny but sliding into him myself will be much better. As I went in he seemed to get more talkative, nerves I assumed. He said I was the third man he had met and he didn’t always get fucked. My cock made its way into him as he talked, he was still surprisingly tight despite the toys.

The straight boy continued on about not wanting to suck cock but loving his arse being filled. He had tried it with a girl once and hadn’t enjoyed it. He loved the feeling of an older man taking him. By now I’m fully inside him and begin to pull out and in to get him used to the feeling.

Finally, he goes quiet as my cock begins pounding his straight arse and his head rolls back as he takes me. His hand ran up and down his cock faster as I pounded him harder. One of my hands gently played with his nipple as I enjoyed thrusting inside him.

He barely acknowledged what had just happened as he jumped off the bed and headed towards his clothes in the bathroom. The only clue is a little stagger as his legs get used to being together again.

A couple of days before I head off for Christmas I see the lad walking in a nearby street. He holds his girlfriend’s hand and his mate talks loudly. He had asked me not to acknowledge him outside and I don’t. It was clear we both saw each other and I like to think his arsehole twitched as he recalled what I had done to him. I’m sure his grip tightened on his girlfriend’s hand, too.

Merry Christmas and all the best for the New Year.