Some people ask if I have a preference for men from certain countries, my response is usually I’m more ageist, than racist. Subs come to London from around the world and I’m more than willing to let them kiss my British feet. Plus Britain is full of variety, so why not have them all.

In the build up to the Chinese New Year I got a brief response to my ad on Craigslist: Hey. Saw your ad and I’m interested. Sometimes short is sweet, especially when two photos of a fresh faced Chinese lad were attached.

The usual to and fro began as I decided if I wanted to use the sub or not. He was quite new and hadn’t sorted out his limits yet but was pretty open. He hadn’t had sex recently, with male or female. He confirmed he would worship scented feet and was 25. He seemed excited, but his replies were always brief.

His first email was just before 9am Saturday and we agreed to meet 1:30pm Sunday. It seemed nice to have a Chinese on their special weekend.

At 13:35 he messaged to say he was at the door and when I opened it a young, well dressed Asian lad stood in front of me. I invited him in noticing two things, firstly he was very short and secondly he looked very young. Neither of these bothered me as I knew he was 25 and I enjoy towering over lads.

Once in the hallway I pushed him into the wall and made him tell me he was going to be a good fag for me. As he spoke I took his coat off and then his tops. My fingers squeezed his nipples and it was funny to see him deal with the pain. His black hair was long on top and shaved at the side, I used it to pull back him head and spit in his mouth.

As commanded his removed his white trainers to reveal white trainer socks with a red band. Once his trousers were off he put his trainers back on. His pants were nothing special so I pulled them down and ordered him to kick them away. I then collared my new toy and held him by it as I inspected the goods. He had hardly any body hair. His small willy did not bother me, as I had little use for it. Reaching down he did have two large balls, so I squeezed them and made him beg me to use him.

Pulling him through to the living room I sat on the sofa and pulled him over my knee.

“We agreed half past one, but you turned up at twenty-five to two.”

“Two smacks for every minute late.”

His little arse was begging for a slapping so I would have done it anyway. I began to spank him and made him count. He was a noisy boi but he took it well.

I still that he might do a runner. Putting my hand in his head I pushed his face into my leather sofa and continued to redden his arse.

Using the collar I got him back on his knees and order my Nikes cleaned. In an uncertain manner he begin to lick my black and white trainers. When I pulled one off and ordered his face inside his tiny head almost vanish in my larger sneaker. I watched his chest move as his pulled in my scent.

In the same uncertain manner he continued by licking and kissing my white, sweaty sock. It was clear this boi needed some more experience, but the fact that he continued was a good sign that he was serious about serving me. The verbal continued, his hand gripped my leg, as his face worshipped my sock.

I stood up and kick my other Nike off. As I pulled down my shorts I asked the sub if he wanted cock. He immediately started to beg to have my manhood inside his mouth. I was wearing some fetish-wear red and black underwear. He moved closer and nuzzled my bulge. As he looked up he continued pleading for it. As my cock made its first appearance I saw him greedily eye up his treat. I gripped his hair and slap my hardon on his face making him beg even more. Finally, I dropped my cock on his tongue and his joyful work began.

The boi happily slid up and down my cock and it felt good to be serviced by him. I sat down so I could enjoy the feeling of the knelt boi pleasuring me. During some of the sucking he made eye contact to ensure he was pleasing his man.

When I stood up and pull him to his feet I was reminded of the size difference. He cane up to around my nipples. I grabbed the collar and led the boi to my bedroom.

Once pushed on the bed the boi lay on his front and let’s me inspect his body. He looked good in collar, socks and trainers. His small arse tempted me to get inside him.

“Put your hands on your arse cheeks and pull them apart to show me your boicunt.”

With a mumbled Yes Sir the boi obeyed. His ring looked tight and I know it was going to be a struggle to get inside him, but I knew I would.

I climbed onto the bed and got the boi between my legs. He was a very oral sub and licked, kissed and sucked my cock like it was his world; as was only right. I kept the verbal up and he allowed the words to soak in.

You will remember the boi was not clear on limits. I told him next time he returns I’ll have photographs of him with my cock in him. I don’t push photos in sessions but some sluts love showing off and I knew this lad would love seeing my cock in his mouth.

“Have you done pixs before?”

I got up and knelt behind the boi to tease him with some lubed fingers. He was a quiet sub. He told me he hadn’t been fucked for months. After warming him up I tried to slide my hardon in but his nerves were making him clam up. He said he was sorry but I told him not to worry. 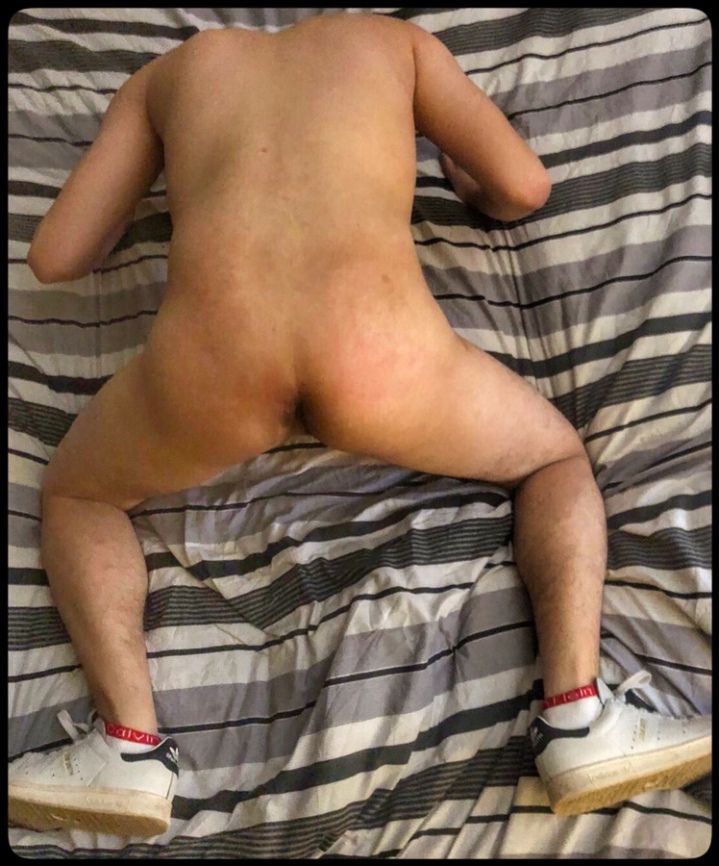 I flipped him on his back and with his feet on my shoulders I played with his hole. My other hand moved to his neck and I firmly held him. I told told him he was my boi now and he was going to be fucked. He said he wanted it so badly. I lent down to his ear and kept up the verbal. As I talk my cock found its mark and began to slide in.

In this new position I could see his eyes and as I looked at him he nodded his encouragement. My fat cock slid further home and the boi smiled as I began to stretch his ring. I felt both his hands on my legs, he pulled me closer to get me deeper inside.

The boi’s hole was now mine.

As I pulled out a worried look crossed his face but he relaxed as I went back inside. In no time he was taking my cock well. I stopped to get a photo with him on his back being penetrated. All camera shyness was gone.

With him flipped back to doggy style I pulled his head back with my collar. This boi could not say no to his Master. I moved my hand to his hair and he loved taken it rough.

We continued to roll around and change positions. I slapped him. Spat in his mouth. He took it all. Sometimes you use a sub and you know they are fully in the zone. They are yours.

At one point a presented my arse to him and told him to lick it. He vanished between my cheeks very happily. I passed him my camera and told him to take some selfies. When I looked at the pics he was tongue deep and proudly staring at the camera.