So, I went on a fishing expedition on Craigslist at the end of last week. In no time the emails were coming in asking for use. Some were obviously cockteasers, some from guys I had turned down before, but a few were of interest. I received a couple saying how hot this blog is; which is always good to hear from readers.

One particular guy sounded like a possibility and he was good enough to attach a photo of his arse. His email read:

We started to talk and this lad was clearly keen on a meet; a long game of email tennis was not his thing. He wanted to know when I was free and could I accom. His first email was late Saturday night and he was at my door by 1pm Sunday.

I could barely see him when he arrived as he was covered from head to toe due to the cold snap we are having in London. It’s not actually that cold, but gays have a winter wardrobe and they will wear it! I invited him in and once inside the door I began to unwrap the gift which had delivered itself. It was a surprise when I pulled off his hat as the boi had bleached his hair and the photo he had sent was out of date. Still, the look suited him and in no time he was stripped down to his white socks with green and yellow hoops at the top.

Pushing his face against the wall I slapped his white arse and enjoyed the sound echoing off my walls.

“So you been cruising Craigslist and now you’re here to serve me, cunt?”

There was a tinge of an accent but as regular readers will know, and all good subs should know, that was not what caught my attention. I spanked his arse and then pulled his head back by his now blonde hair.

“What the fuck did you just forget to say?”

Oh dear! I now hold him by the neck and bring his ear to my mouth.

“I don’t care what you’re here for. If you don’t start addressing me correctly you won’t be getting anything.”

It takes a moment, and then finally, he realised his mistake.

With the training started I spun boi around and pushed him to his knees. I held my collar out and asked if he wanted to have the honour of wearing it. He confirmed that he did and addressed me correctly. Now in socks and collar, the boi is finally dressed correctly. It’s always good to see how quickly I can get a total stranger in the correct uniform. Once in the presence of of a man subs forget any embarrassment at being naked.

Noticing the boi is playing with his willy I kick his hand away. I usually let a boi play when he is learning the scent of my sweaty socks. It’s good for them to associate my scent with pleasure. As this boi wasn’t learning my scent he had to put up with his worthless willy being ignored. This meet was all about my cock.

Grabbing him by the collar I moved the action to the sofa so I could sit back as he worked. He continued to worship my white sock as I rested my other foot on his back; giving him the occasional kick along with the verbal. It’s good to encourage a boi.

Bringing him to his knees I ordered him to repeat some insults about himself as he looked me in the eye. At one point a used his blonde hair to pull his head back and spat into his open mouth. The sub swallowed down his treat.

I’m wearing some black Nike shorts and when his face was pushed to them he finds my hardon and took it, and the shorts, into his mouth. I let him work for awhile before standing up and slowly pulling the shorts down. It was fun to watch his eyes as he waited for my cock to spring out from its covering. When it did I held his head to stop him swallowing it up straight away. I made him beg for it and repeat how much he wanted it in him. I made him stick out his tongue and say please in a stupid voice. I made him do it again but louder. His eyes flicked between my cock and my eyes. Clearly wondering what he had to do to get my manhood inside him.

I loosened my grip on his head and my cock vanished inside him. He enjoyed taking the whole thing in and then pulled back for air. I held his head still and gave him a skull fuck; he loved it.

Sitting back down I gave the fag some quality cock time. He had spent all day and night thinking about this so was only fair to give him some time attached to me.

Between sucking I gave his face the odd slap and trained him to thanks me. I also reddened his white arse more.

After awhile I grabbed him by the collar and pushed him towards the bedroom. At one point I held him up so my wet cock slid between his legs; he groaned in desperation for me to use him both ends.

Once in the bedroom, I push him down and he clearly loves showing off his arse for his Master. I gave it a spanking and he thanked me. Subs tend to learn fast.

I threw off all but my socks and climbed onto him. My cock slides back between his cheeks. I find subs love the weight of a man on them. This one responded in a manner that showed he wanted me close to him.

With my mouth next to his ear, I began to whisper about what a slut he was, surfing the Internet for cock and letting me use him like a dog. I moved a hand over his mouth and made him hold his breath. When I removed my hand he gasps for air.

Moving off him I pulled him to his knees and pushed his head down, arching his back he naturally assumed the submissive position. Spreading his cheeks I looked on his boicunt, knowing it was all mine to pound.

I lubed him up and rubbered up, then made him beg for me to fuck him. I could see him pushing his head into the bed hoping it will get me in him sooner.

I pushed my cock-head through his ring I heard him groan and it felt great to be gripped by him. After giving him a moment to adjust I sped up the pounding and the slut made encouraging noises. I pulled on the collar and his back arches more; putting him at the perfect angle. Each thrust I almost pulled out of him so his boicunt had to get used to my thickness. In no time I’m having a great ride.

Pulling out totally I flipped him on his back and lifted his legs up. Soon I was back inside him and watching the faces he pulled as I enjoy fucking.

With his mouth open, I spat and he loved his treat. I do a slow spit and watch as the string of saliva made its way towards his wide open mouth. His eyes lit up as he watched the drip slowly approach him. Once it is gone I slapped him and made him thank me.

We switched positions a few more times and the boicunt soon gets used to being open.

Freeing my cock I sat back and ordered the cunt to get his mouth back on my cock. Of course, he did not need telling twice. It was good to look at his sexy body, dressed in collar and socks, as his bleached blonde hair bobbed up and down pleasuring my cock.

His willy has remained hard and ignored as, all good subs should know, their pleasure zones are their holes. 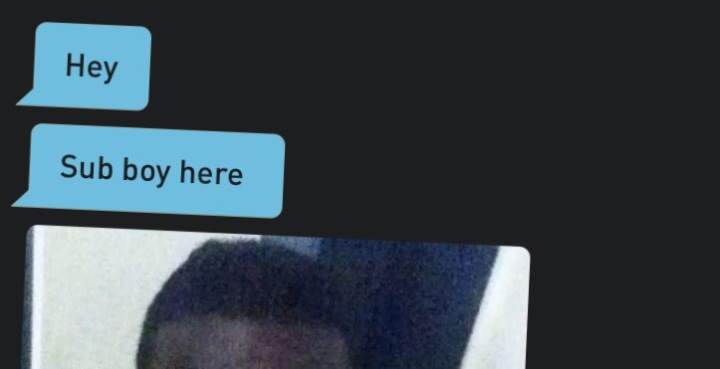 2 thoughts on “Blondes Have More Fun”