In Australia they call Cairns a city but I would call it a small town! That said, it is a great place to visit if you want to see the Great Barrier Reef and the Daintree rainforest.

We chatted about what could happen and then he said he wasn’t free till later. So I said message me and assumed I would hear back from him. So many guys love talking about meets but never experience the meet.

Later as I was relaxing a message came through that the boi was trying to find my hotel and asking where I was. I messaged saying he was suppose to give me a warning but he replied back he was outside and what was my room number. I told him and quickly got ready.

The lad arrived and was hornier than his photos. He had a classic Australian Rules look about him. As I pulled off his clothing I noticed how sweaty he was so I gave him some abuse about running over for a slapping.

Soon he was stripped to his white footy socks and he got more verbal as they had GAY written on them. With a slap I pushed him to the ground and spat on him. He had agreed to try feet for the first time so I held his head down and rubbed it on my Nikes. As I felt him worship them I gave his arse a smack and then slid a finger into his sweaty boicunt.

Pulling off the Nike I sat on the bed and watched as the boi sniffed his first sock. He kept looking up and I knew the fag was loving being abused. He was also rock hard; not that his cock was getting any attention. With the sock off his tongue ran over my foot and he was told to suck my toes like he was sucking cock. He took to feet like a natural.

Standing over him I made him beg to taste my cock. I ordered him to stick his tongue out and say please. I laughed at the stupid noise he was making. As he looked up I cock-slapped his face and tongue and the bitch took it well. Then my cock slid into his gob and I let him suck away.

As I was in the mood to fuck I dragged him off me and pushed him on the bed. He got up on his hands and knees and started showing off his cunt straight away. Lubing him up I safely pushed into him and started to pound him quickly. Soon I pulled his head up and made him look at himself in the mirror. Reminding him he had dashed across town to let me fuck him.

The boi had explained he had a regular top who was very large so I went straight to fucking him hard. Later he told me his regular was quite gentle with him. I think he may need a new regular because the bitch loved it rough.

The new angle meant I could see his face and he was pulling some faces. He was screwing his face up like he couldn’t decide if he was in heaven or hell. Of course this just encouraged me to thrust into him harder. I removed the gag just so I could him him. He sounded like a straight lad taking cock for the first time. As I fucked a spat in his face and gave him a slap. He looked like a boi who couldn’t decide what he was enjoying more. I was holding his arms down so he couldn’t move but I moved one hand to his neck. I held him tightly as my cock continued to stretch him out. The boi looked like he was going to cry.

Soon he was spunking; he ate and rubbed in his own spunk. He then collapsed next to me and said the sex was amazing.

How he will ever go back to vanilla sex is beyond me! 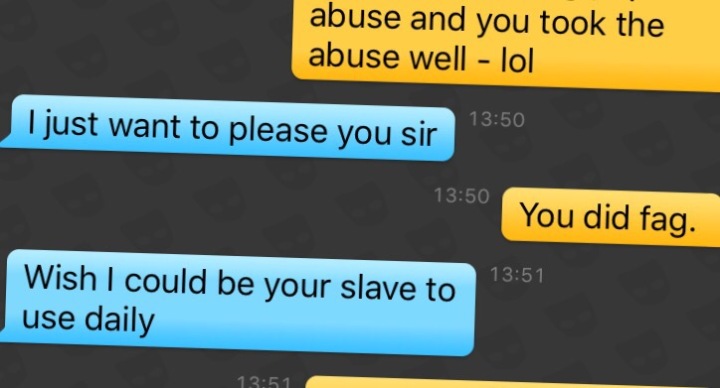 The Great Barrier Reef is definitely worth a visit!!!!

To keep this website going it is important to support it. So, feel free to send over a little donation if this site has given you some pleasure ....