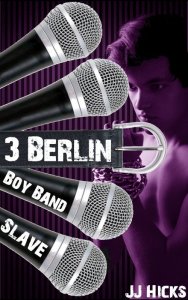 The third instalment in the Boy Band Slave series finds Zac and his band, 8-0-1, on tour in Berlin. Some of the band have been enjoying the freedom touring brings, but Zac has been loyal to his Master. After a few weeks apart though both Master and boi are now in need of physical satisfaction.

Riding his motorbike towards the German capital Zac’s Master is about to show his boi both sides of the city; its wonderful architecture and its more seedy underbelly. What fun can they get up to with a playroom and a sex club? Little do they know the city has a few surprises for them too. Not all of them good.

As well as spending time with each other they also get to meet plenty of other men to share the fun. As well as getting introduced to the mysterious Hephaestion Club.

‘Berlin’ continues the gay adult series called Boy Band Slave, click on the Amazon Kindle links below to buy the ebook. This is a novelette of around 20,000 words. A free preview of the book is available by clicking here.

It follows on from the first book, Hotel and the second book, Club.

To keep this website going it is important to support it. So, feel free to send over a little donation if this site has given you some pleasure ....